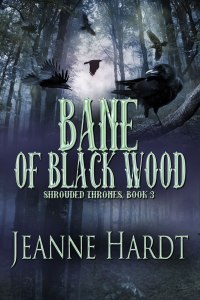 Sebastian never believed his search for adventure would result in banishment from the realm he was born to rule. Forced to make Padrida his home, he faces far greater challenges. He had thought that avenging his father’s death weighed most important on his heart, yet it pales in comparison to a much more painful tragedy that strikes without warning.

Olivia has settled into life in Padrida, wishing she had never left. But the words of the crazed priest who performed the marriage rites for her and Sebastian have come back to haunt them. Nothing could have prepared her for the trials they encounter, and she begins to regret allowing Sebastian into her heart.

One by one, kings are dying, and Angeline blissfully embraces Masa’s prophecy, believing herself to be the savior of all realms and the foretold high queen. Her manipulations have worked perfectly, and her sights are now set on bringing the greatest king of all to an end.

Frederick revels in his position as high king, and when he takes Angeline as a new bride, he wastes no time showing her who has the upper hand. He can order death with the flick of a wrist and pleasure with a single word, and if she does not bow to his demands, he will discard her as easily as releasing a single breath.

No one is aware of who lurks in Black Wood. The bane of all is plotting his own course. Time is his greatest friend, and he is very, very patient.