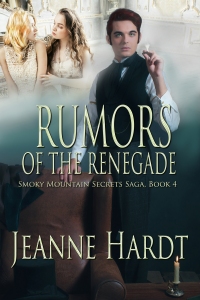 RUMORS OF THE RENEGADE

Five years have passed since the end of the war, and the families in Cades Cove have finally returned to a sense of normalcy. The very thing Lucas Larsen hates. He’s tried his best to accept life as a farmer, but he’s restless and wants something more.

His sister, Lily, knows just how unsettled he is. His poor behavior is affecting all of them, and she and Caleb fear he’ll have a negative influence on their children. They encourage him to visit Water’s Rest in St. Louis, hoping Luke and Francine Waters can help Lucas find peace and purpose. He makes the journey, but comes face to face with more than one of his former demons.

Though Lucas is no longer causing difficulties in the cove, the peaceful valley is not without its share of troubles.

From the day Alice Henry arrived, Buck Larsen fell hard, and his feelings were eagerly reciprocated. When he finally decides to act on them, his deceased wife mysteriously raises objections. Both families are saddened by his sudden disinterest in Alice, and when they learn his reasoning, believe he’s lost his mind.

War is no more, yet conflict most certainly remains. Only the love of family can sustain them and pull everyone through.