One of the best articles I read recently, regarded writing in a passive or active voice.

Since I’m in the process of a major edit, I’ve noticed that I frequently write passively. That’s something I’m changing, and I’m amazed at the difference in the way my book reads.

Even though I’m writing in third person, and I use the word ‘was’ frequently, it’s easy to fall into the trap of always using it, and it’s not necessary. Let me explain…

Here’s a simple sentence: He was alone. Okay…that works. Cut and dry. (very dry) But, it paints a picture in my mind, and it’s alright.

Of course, these are made up, sample sentences, and not something I would put in a book. If I did, my readers would be bored to tears!

One of the first sentences I ever wrote in a book was: She had grown up there, and it was all she’d ever known. Learning what I know now, that sentence became: She grew up there, and it was all she knew. (But, to tell you the truth, I have completely removed that sentence, because it was in an ‘introduction’ to my book which has been completely eliminated!)

Here is another simple example: He was standing in the doorway.

The simple change: He stood in the doorway.

It’s always good to read aloud what you’ve written. If it flows off your tongue naturally, that’s a good sign. If it jolts you, and doesn’t feel right, then it will most likely jolt your

readers and you will need to look closely at what jolted you and fix it. It’s important to get your thoughts on paper, (computer), but remember that it can always be changed. It sometimes helps to walk away from it for a while. I’m surprised at how many times I can go back to something I wrote, and after re-reading, see exactly how I need to fix it and make it better.

If you’ve ever written a sentence that makes you wince each time you read it, it feels really good when you come up with a way to say what you mean in an “unwincable” way. (Yes, I know…it’s not a word!)

He looked out the window.

How important is it to have a “clean” manuscript when the time comes to submit to an agent or publisher? And by clean, I don’t mean “G-Rated.”

This kind of clean deals with punctuation, spelling, and grammar.

Coming from a writer who is on the edge of being published, I can tell you what I’ve learned. The cleaner, the better.

Yes, if you intend to publish traditionally, then you will have an editor who will go over your work with a fine-toothed comb, but I believe they appreciate effort on the writer’s part even before they see the manuscript. I know that if I was sitting in their position, I would be more inclined to read something clean, than something that had bothersome errors staring at me in every sentence.

Have you ever read a book and found typos? I know I have, and they tend to throw off my reading. I know that we’re all human, and it’s impossible to catch every typo, but give it your best. This definitely applies if you plan to self-publish. And if that’s something you plan to do, I would highly suggest you hire a professional editor to go over your work. The last thing you want to do is publish something that isn’t ready.

As for the rules of writing…they can change.

Years ago, (back in the days of typewriters), the rule for spaces after a period, was two spaces. Somewhere along the line, that changed. The rule is now, one space. This may seem trivial, but it makes a difference. It took me a while to get used to not hitting the space bar twice at the end of a sentence, but have now almost mastered it. I occasionally slip!

Which brings up something else. The word, (or words), awhile. I read a very good article about how to know when to use awhile, or a while. I’ve been using this little trick ever since: It will almost always be two words, unless you can replace the words in your sentence with “for a short time.”

I use Word 2010 for all of my writing, and I drive it crazy! I write dialog to fit my characters, and most of them do not speak proper English. So the automated “grammar and spell check” freaks out. I laughed the first time I saw the message, “this document contains too many grammatical/spelling errors to display.” I don’t think those are the exact words, but close.

If you have any fun little rules of writing that you would like to share, please do. I find that I’m constantly learning new things and would love your input.

No matter, what…keep on writing. The more you write, the better you will get.

I think I’ll lay down awhile, or maybe sleep for a while.

The best made plans…

Last week, I told myself that I needed to be more faithful with my blogging. I jotted down a few notes of things I wanted to discuss, and then…

My husband had a heart attack on Friday night. Believe me, it’s something I hope to never have to go through again. He had open heart surgery seven years ago, but that was prompted by a bad EKG at a regular check-up, not a heart attack. I wouldn’t wish either of these scenarios on anyone, but believe me, the experience I had Friday night was terrifying. Luckily, we live only 15 minutes from a hospital, and I was able to get him there quickly. I opted to drive him myself, feeling I could get him there quicker than waiting for an ambulance. Maybe not a wise idea, but we live out in the country, and it seemed the smart thing to do at the time. Besides, he wasn’t completely convinced he was having a heart attack, but was hurting something fierce.

I’m happy to report that that he’s doing very well, thanks to the care of amazing doctors and nurses, and a successful emergency surgery.

This is one of those life experiences that I had witnessed on TV and movies, but having lived it now first-hand, I have a whole new perspective. My sister had a heart attack some time ago, and so guess who I turned to when I was in the ER, waiting, while they worked on my husband? Yes, my poor sister! I doubt she’ll ever forget the panic in my voice, or the little-to-no sense I was making in conversation. But, simply by hearing her voice, I was comforted. Thank you, Sis.

When he had his open heart surgery, I stayed by his side throughout his week’s stay at the hospital. At that time, I read “Harry Potter” while he slept. This hospital stay was only three days, (Yeah!), but I was glad I had my laptop. Rather than reading, I edited. I rested my mind by escaping to 1870-something, and caught myself up in the trials and tribulations of my fictitious family. At one point, I read to my husband, and promptly put him to sleep! He promised me that it wasn’t out of boredom. I believe him…

So now, you know where I’ve been! I still have my notes for the “writing” posts I intend to do, and will post them soon.  I pray that we’ll have smooth sailing for a while. Enough drama in our lives this past year to last a very LONG time.

Thanks for stopping by, and…

Me and my sister…Always there for me, even way back then!

Every writer has a unique voice. As a reader, you should be able to hear the unique qualities of the book’s author  in your head.

Some authors write with a natural flair for humor. Others, have a more subtle approach. But it’s your voice as a writer that will cause a reader to keep reading. You may have the best plot in the world, but if you have a dull, monotone, completely uninteresting voice, your reader won’t get far enough into your book to see that you have a killer plot!

It was easier to understand “voice” when I was working as a singer. My voice was obvious. It boomed out into the lounge thanks to a great sound system. I’m happy to say that no one ever threw rotten vegetables at me. A good sign that my voice was appreciated. But, everyone has different taste in music, and not all people liked to hear me sing. I didn’t rap, (okay…I made an attempt at it once), and I wasn’t into heavy metal. Also, opera was, and is, something I’ll never attempt to sing. It’s not me. It’s not my voice.

When I first decided to sing, I had people ask me if I was going to take voice lessons. Should I have been insulted? No. Though I chose not to take voice lessons, I look back now and believe they could have helped me. I was afraid that they would take away my unique qualities and make me like everyone else. What I didn’t understand is that I could have learned techniques that would have enhanced my voice, not change it. Perhaps it was pride that kept me from taking that next step. Whatever the case may be, I know now that it never hurts to learn ways to improve your craft.

So, how does this influence me as a writer? Well…again, I have a unique writing voice. But what I’ve learned is that I’m not going to shy away from learning ways to improve my writing. When I first joined RWA and my local MCRW chapter, I had someone tell me that I needed to learn what everyone else in the group knew, so that I could be like everyone else. My thought was, ‘why would I want to be like everyone else?’

I understand now. Others in the group knew more than I did about the industry. They knew techniques to improve my writing. Sitting around me was a vast amount of knowledge in the minds of other writers who had no hesitation about sharing what they knew. All I had to do was listen and learn. Wow!

So, instead of being insulted believing that I was being told I was unable to write at that point, I jumped in and started soaking up knowledge. And, after nearly two years in the chapter, I’m still learning. And loving every minute of it!

My voice is still my voice, but now I’ve learned ways of putting it on paper that will make a reader want to keep turning the pages.

Keep your unique qualities, but don’t shy away from learning ways to improve them. 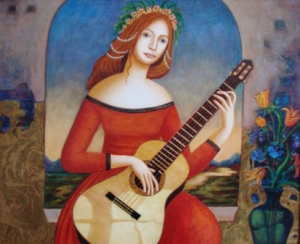