I’m constantly amazed at the ability of the human mind to create new and exciting works of art. Art in all forms. Whether it’s an artist with a paint brush, pencil, or their bare hands, or a writer of music and/or stories.

Everything starts with a vision. An idea that floats around in the brain until the person holding that thought has to let it out.

Throughout my life I’ve been surrounded by artists. People who are driven to set their creativity free. It’s incredible to watch!

My mom is an artist. For as long as I can remember she’s ‘created.’ While I was growing up she painted with oils, then a number of years later she took some classes doing water color and now does both. In addition, some of her creativity came out baking and decorating cakes. Watching her do those was really fun. Plus, there was always leftover frosting in the refrigerator. A great treat for any sugar-craving kid!

Mom is also a singer. She has a beautiful soprano voice. I have great memories of sitting beside her in church singing alto to her soprano. She’s always encouraged me to follow my dreams and use my abilities in any way I could. And since she’s still following my career, (and this blog!), I want to take this opportunity to say, “Thank you, Mom!”

Her example not only nourished my creativity, but taught me to encourage my son. His talent is drawing, and he’s been able to use his ability doing artwork for an on-line video game.

Parents should encourage the individual creativity in their children. It’s important to teach them how to be independent and make a living, but giving them an outlet to use their talents is just as important.

I belong to a writers group, Music City Romance Writers, and am surrounded by many talented writers. Talk about amazing! These authors are creating new stories and bringing to life a multitude of characters that will stay with you forever. I know that each of us hopes to one day write that particular book that will become the new ‘thing.’  And even if that doesn’t happen, we’re all thrilled that we have the opportunity to share our stories and have readers that embrace our characters.

I just heard on the news that we’ll soon be seeing clips from the new “Star Wars” movie. I’ll never forget sitting in a theater in Idaho watching the first movie. The ‘original’ “Star Wars.” (not episode 1) Darth Vader scared me to death just by breathing. And then years later there was the revelation that Vader was Luke’s father. How many of you remember gasping when that secret was revealed?

I can’t wait for the new movie! I’m ready.

These films started as visions by a writer who had a story in their heart that had to be told. Just like “Twilight” or “Harry Potter” or “The Hunger Games.” All of these dreams became books and later, movies. But they all started by an inspired thought.

I hope that if you’re inspired, you’ll follow your heart and mind and do something with that inspiration. Put it on paper, or canvas, or bake a cake that will amaze someone’s eyes and taste buds. And yes, if you’re a baker, it can’t just look good, it has to taste good, too!

Or … dance! Another favorite of mine. An art form unlike any other I’ve mentioned. I’m a big fan of “Dancing with the Stars.” I also used to watch “So You Think You can Dance.” I love to dance but my body doesn’t move like it used to! Still, I can watch and admire those who have the ability.

Thank you for following my blog! And now I need to go and see where my mind will take me today. Time to go down another road not yet traveled. Hope to see you there! 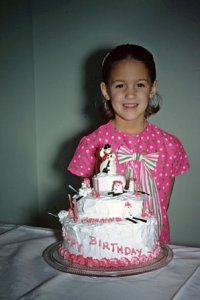 One of Mom’s cakes!