In less than a week, book one of my latest saga will be released! I’m so excited to bring this story into the hands of readers. It’s been in my heart for a great while. From the first time I traveled the loop road around Cades Cove in the Smoky Mountains, the beautiful setting became a part of me. I do all I can to visit the Smokies at least once a year.

In anticipation of the release of “Whispers from the Cove,” I’d like to take this opportunity to introduce you to my heroine, Lily Larsen. Yes, she’s fictitious, but she represents the amazing people of the cove who worked hard and made a life for themselves in the mountains. Though Cades Cove is now part of a national park, when you travel there, you’ll step back in time and easily visualize what it must have been like to live in the beautiful, lush valley. Many of the cabins, churches, and other historical buildings remain.

Lily Larsen was born February 23rd, 1847. The first child of many to Rose and Howard (Buck) Larsen. Labeled a ‘mountain girl’ from the time she took her first steps.

She followed her pa around their small farm and learned all she could from him and her ma. As she grew, and her siblings began to arrive, she understood the meaning of responsibility. Not only did she have an abundance of daily chores, she was also expected to help with the children.

Lily’s tough-as-nails demeanor made her perfect for mountain life. She feared nothing, including hard work.

The family farm thrived, thanks in part to Lily’s help. Her optimism kept her folks smiling and lifted the spirits of her brothers and sister. Her sister, Violet, became her dearest friend. Though their personalities differed, their bond couldn’t be stronger.

At the opening of “Whispers,” Lily is seventeen. Her hands aren’t soft, like those of pampered city girls. They’re callused, rough, and capable. She uses them to plow fields, skin wild game, and cuddle her youngest brother. Her heart is as big as her ambition, but she now has something to fear.

The war between North and South is raging, and soldiers wearing both blue and gray arrive in the cove to find refuge and take whatever they want. They feel entitled to it. Some see the mountain women as spoils of war, and one particular rebel soldier has his eyes on Lily. She’s not naive by any means and knows his intentions are far from those of matrimony.

Even before the soldiers arrived, the war created other problems for her family. Her pa went off to fight, but returned home maimed. Now her folks have lost hope, but Lily’s determined to keep her family’s spirit alive and the farm somehow thriving. She’ll never allow herself to be defeated. That quality is one of her greatest traits.

She longs for love and a family of her own, but the war has made it impossible. Every day, she prays the fighting will end and life will become as it once was. Though they’ve had to struggle to survive, Lily certainly won’t give up hope. It’s not in her character. 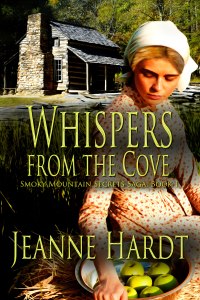 23 thoughts on “Getting to Know Lily Larsen”